After seventy long, wet and cold Irish days, Dail Eireann finally elected a new taoiseach yesterday. To consolidate the lunacy, the new taoiseach is also the old one, bright spark, Enda Kenny.
The accidental taoiseach became the first Fine Gael leader to be re-elected to the post - even if 75% of the electorate voted for the former school teacher to be sent packing. Kenny will lead a coalition government - don't be fooled by other terms - consisting of their old nemesis Fianna Fail and a rabble of 'Independents' selling out their status for short term local and personal gain. As you do in Ireland.

Stitched together, stitched up, call it what you will, Irish democracy took another hit yesterday with the establishment parties once again using the taxpayers money to lure a government no-one wanted.
'A mutant,' as Larry would say.

Kenny was Haugheyesque in his giving in order to secure his place in history, a stint that is sure to be short-lived. If the coalition limp through the first six months they could well go 2-3 years, a ministerial pension being the strong lure for those who chose to prop up the same old, same old. Indications are that could happen, over half of that first six-months is an expenses-laden holiday.
Who knows it could even go longer, if Kenny's inevitable departure provides a distraction in the coming twelve months and a more competent leader can be found within the Irish-Tory ranks. That might be a hard find, though I'll take a stab on Simon Coveney being that person having been seen wining and dining with the Bilderberg Group a few years back. But that's another story.............

It's too depressing to go into the list of new A & B Ministers. They offer nothing new. Coveney, Varadkar and Burton might feel a little shafted having been shifted from their existing portfolios into less-powerful ones. 29-year-old beanpole and spin soprano, Simon Harris gets the toxic Health portfolio.
The only plus was a more gender balanced cabinet, with Francis Fitzgerald leading the female posse in the role of Tanaiste and Regina Doherty getting the whip.

In a parting shot, Labour leader Joan Burton ordered her troops, all seven of them, to vote against Enda's stewardship having previously backed him and even flirted with the idea of being bedfellows again.
Obviously soured by the events of recent weeks over the issue of water, Joan remained defiant and proud of her parties term in government, before making her way to her true imprisonment on the back benches, just another number once again.
To say Labour were chewed up and spat out is putting it mildly, an indignant end to an indignant term. They were warned.

The 32nd Dail could very well be a historic one, but the reasons for that remain unknown. What is known is 65% of the electorate turned out to vote. Of that, 25% gave a vote to Fine Gael, equating to almost 550,000 votes. It's enough to grab power in Ireland.
Twice as many people did not even bother to vote. Making them realize the actual power they have is key to any significant change in Ireland going forward. That's a challenge that thus far as proved elusive to those who yearn for a more equality-based republic, where fairness is the rule of law and elitism is regarded as public hazard.

Larry, being a bit eccentric himself, might have liked new member of parliament, Danny Healy-Rae. When Ireland looks for people to take us forward though, the needle in that particular haystack would appear to be as distant as ever. Entertaining bunch, us Irish.

Posted by The Writing Life & Other Absurdities at 11:31:00 AM No comments:

I'm tapping this bedraggled - a bit like a Fine Gael and Labour follower in recent days I might suspect. Many stood on the crest of a wave just five-short years ago, toed the party lines, submissively whipped. Told it was all for the good of the country it was. They drove it home, the austerity. Relentlessly. The eviction bill. The treatment of minorities and the vulnerable, right down to those who can not care for themselves. The homeless crisis. The phantom debt deal. The sale of state assets to vultures. Some brewed at home. Most not.

And water. That abundant, if somewhat soiled substance, necessary for keeping humans alive and to a certain, personal, hygienic standard. Plants and animals like it too. Half the nation seems drawn to seep under it should it fall freely from the heavens at certain times of the year.
Yep, that pesky water sure caused a disturbance.

The protestations from across the class-divide, nationwide, met with derision from Michael 'Phantom deal' Noonan, Alan 'Power is a drug' Kelly and nearly everyone else across the established lines that cross between various orders vying for thought each day of the week in Ireland, now that the church no longer holds much sway with a more clued in population. Paddywackery may work for the tourists, but Paddy, it seems, is sick of the wackery. At least the political wackery of the past four decades.

As it stands today, 62 days since Ireland delivered her verdict, a pact is emerging which will suspend water charges for a short period of time, whist a consultation period is provided for on the issue. It's face-saving guff for both parties, and if it remains as so, it will damage both. Unemployed TD's must be scratching their heads at Enda Kenny's hunger for a short second-term as taoiseach, while those who survived his five-year shambles decide how to feed him to the crows.

Fianna Fail promised a longer term abolition of charges and of its spectacularly named super-quango, Irish Water. They hardly peeled back the skin of the banana. If Kenny can bribe a few Indies now, Martin will support him as taoiseach and watch his demise from the sidelines, biding his time. He may regret that. If history is a governing concept of the future, there's enough to go by now to know that there are a few in the halls of the Dail that are there for the short-term biding. Few schools, few roads. The usual. Not much changes - except the popularity of the self-appointed wise. It's on a downward spiral that looks good on any graph. It can only be a good thing.

Water's for another day. Be a brave day to bring it back out. V is for victory. Expect it to be short-lived as they connive some other way to saddle most further.

I used to think Larry was mad when he mentioned a Tory-style poll tax here for Ireland back in the day. Now I'm not so sure. Just one of the ideas Larry had on taxation. A 'beer-bottle' tax and a tooth-tax being another two he wrote notes on. I may have a lead on them, but that's another day.

I mentioned my bedraggle-ment - vomiting bug. Seven long days. That's a lot of retching. Leave you sore. Old.
Still, got a banana down me today. It's still in there. I can also see me hip bones again. Even your one with the big arse and i-Phone can't claim that. Could brighter days be ahead?

"Ask me bolleeks!,' as Leon used to say.

Posted by The Writing Life & Other Absurdities at 12:54:00 AM No comments:

Yesterday saw another doss day for most of our newly elected representatives. In short, many voted for another eight days off as their first point of business. Then they tried to elect a leader for the country.
First up, after some sycophantic ravings from selected members of the party faithful, was acting-caretaker-accidental taoiseach, Enda Kenny. He failed, his third attempt in five weeks. Fourth in all? A record perhaps? More mauling for Kenny, he got less support than when he first went for the post a few weeks back. Labour finally deserting him.
Joan 'days are numbered' Burton haranguing Fianna Fail on their past  - they're on equal terms now on that one.
Next up was Michael Martin, vetted as the first Fianna fail leader not to be become taoiseach, and so far that remains so. He wants to lead a minority government. He too, failed, but he's not the one facing the end of his political career.
Then it was Ruth Coppinger's turn, the first female to ever stand for election of taoiseach of the country. It does tell a story in itself. She too was denied after polling admirably in double-figures.
No-one else was put forward. Gerry Adams called it a 'charade.' Outside the little cohort of interested parties, i think there's consensus on that. 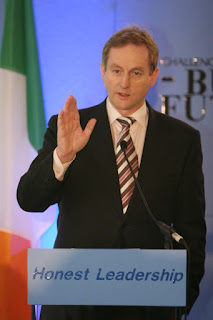 Next up was an evening meeting on neutral ground between the natural bed-fellows. Tipple of choice. First stroke to Enda - he offers Martin an equal partnership in government with the help of a couple of Indies for security. History is in the making. Martin sleeps on it. Fine Gael teamsters feel smug. They are in the driving seat. Civil war politics is over. Who would refuse?
But the soldiers of destiny are having none of it. Brief meeting today - short. No deal. The charade continues.
Not a great time to be governing - the countries been stripped bare, there's little or no money and there are major crisis' in health and homelessness - to name but two. Not to mention the carnivorous dealings of the capital structures of state, NAMA being one. Defending tax haven accusations, both at home and abroad, being another. Shaky economic foundations worldwide and a geopolitical situation that's look more precarious with each passing day.

I doubt another election will sort the men out from the boys. There are no men. Unfortunately, world wide, statesmen seem to be in terminal decline. No vision much anymore. Election promises that turn out to be lies. The lust for globalization creating more division in societies everywhere than perhaps at any other time in history. The middle-class are the new working-class. What's left is swept up in no-hour contracts, work-for-free schemes, ineffective courses or long periods of soul-draining life on the dole.
What's left after that is a vast network of carers and volunteers, picking up the pieces of a century of failure of the political classes in Ireland - most voiceless. Barely funded. Not funded at all.

After the downfall of Charles J. Haughey, Larry suggested Ireland should go rogue and elect a Dictator. One candidate from the left, the right and the centre...and a novelty candidate from the Independent spectrum. All set out their stall - first past the post. Ten year term. £100k-a year. Tax-free. Full-reign. One-term. A guillotine vote at the end. Larry always had a touch of French about him.
'Keep them on their toes,' he'd say, painting up his latest placard.
One of the many ideas Larry had. All in his manifesto. I saw it a few times. Back when he and Leo were mates. Rather thick in content. Larry thought a lot as he stitched his animals together.
Someone must have it now. But who? Maybe I'll give Joe Lumley a call again. Fuckin' jet-setter, never in the office. I see he's into Financial Holdings now.

Posted by The Writing Life & Other Absurdities at 12:10:00 AM No comments: 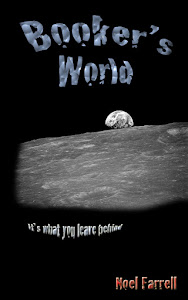 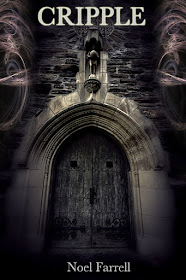